Headache. Nonstop sneezing. Stuffy nose. Fatigue. If you're an airborne allergy sufferer, these symptoms are your constant companions for several months every year.  For those with year-round allergies, each day brings a cycle of misery, often broken only temporarily by powerful drugs—antihistamines and decongestants—often with side effects more uncomfortable than the original symptoms. Airborne allergies usually affect the respiratory system. Some airborne allergies, like the one we call hay fever, are seasonal. 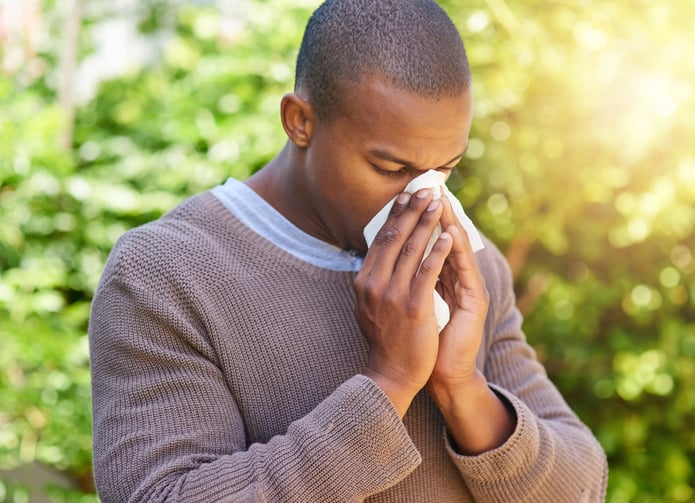 Seems like hay fever must be an allergy to “hay”, but, actually, it is colloquial for allergic rhinitis. It involves sneezing, itching throat and eyes, sinus headaches, and sometimes coughing. It can be triggered by different kinds of pollen throughout the seasons: tree pollens in spring, grass and weed pollens in summer and ragweed pollen in the fall.

An allergy is a normal immune response gone haywire. When an invader pollen enters the body, the body reacts, which can take many forms, but one kind is an inflammatory reaction—the rushing of blood and/or mucus to the site of invasion. What is not normal is when the body mounts this type of response against something that is not in fact a threat to the body‚ such as grass or tree pollen.

Boasting an enormous leaf with a three foot diameter, probably the largest leaf of all European plants, butterbur is a slam dunk for hay fever.

Butterbur leaves and root are used particularly in cases of acute pain of smooth muscle, such as in the urinary tract, especially when stones are present. This quality also makes it useful for respiratory disorders involving cough and asthma.

A Swiss study indicates that seasonal allergy sufferers who received an extract of butterbur (Petasites hybridus) experienced symptom relief equivalent to patients treated with the antihistamine Zyrtec (cetirizine). The scientists compared the effectiveness and tolerability of the herb, compared to the drug, in patients with seasonal allergic rhinitis. In a randomized, double blind, parallel group comparison, the 125 patients participating in the study were treated with either butterbur (61 patients) or cetirizine (64 patients) for two weeks. The butterbur dose (standardized to 8.0mg of total petasine per tablet) was one tablet, four times daily, for a total of only 32 mg per day. The patients described similar symptom relief with both treatments.

Usually, butterbur supplements are standardized to contain a minimum of 7.5 mg of petasin and isopetasin per tablet. Adults commonly take 50-100 mg twice daily with meals.

Clinical herbalists rave about the effect of stinging nettle for allergy symptoms. Although the research remains preliminary, scientific study continues to point to the anti-inflammatory properties of nettle. One study showed that nettle produced an anti-allergy effect. At least one of the active components seems to be a bioflavonoid, although other authorities think it is characteristic polysaccharides, and yet others, lectins.

It’s also known that nettles contain histamines, the same type of chemicals produced by the body in an allergic reaction. Another proposed mechanism for nettle is that the histamines in nettle attach to histamine receptor sites in the body’s cells, blocking your body’s own histamines from attaching.

Nettle loses its anti-allergy power if not harvested and processed correctly. Seek out a high quality product that has specially processed, such as by freeze drying, to retain the anti-allergy activity. This special processing costs more; so don’t be seduced by cheap imitations.

Take up to 10,000 mg of specially processed nettle leaf powder in capsules per day to relieve the temporary symptoms of hay fever. Remember, this short-term use of nettle is not curative. Use nettle when you would otherwise use an antihistamine drug to stop your misery. Symptoms often begin to improve within 15 minutes, and the effect typically lasts for about four hours. This is a very safe herb, and the results can be truly amazing. It can erase your sniffly nose and watery eyes. You know you’ve been itchin’ to try it.