7 Steps to Conflict Resolution (Without the Dread)

Posted by CLIMB Professional Development and Training on December 19, 2017 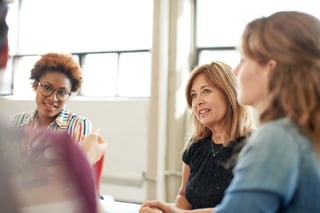 Whether it’s a dispute with a coworker or disagreement with a supervisor, the workplace is fraught with conflicts, disputes, and disagreements that have to be ironed out one way or the other. And as much as we try to avoid conflict - or even ignore those that exist - at some point everyone will need to employ some kind of conflict resolution skills to cope with workplace disagreements.

Many of us end up spending more time with coworkers than with our own friends and family, making conflict in the workplace particularly dreadful. That being said, approaching and effectively solving the core issues causing the problem is often the most intimidating part for people.

Thankfully, there are some simple steps that can make the process of conflict resolution in the workplace easier, less dreadful, and more effective. Here are seven steps that you can use, no matter where you sit on the workplace totem pole, to resolve workplace disagreements -

The first step towards settling a workplace dispute is to simply set up a time and place to discuss the issue. You want to do so in a non-threatening, positive manner - rather than than saying something like “We have a problem, and you need to talk to me tomorrow at noon.” Without getting too much into the nature of the dispute, or who you think might be at fault, you’ll want to consider who is involved in (or affected by) the conflict, and get them to agree to a time to discuss how the entire team can work together towards a more positive environment.

When you have a specific dispute with another coworker, discussions or conversations can quickly devolve into a “blame game” or “he said, she said” type of back and forth. Moreover, any points that either of you make can go in one ear and out the other because of the need to feel “right.” That’s where a third party can help ease tensions, and make both of you see the other side of the equation. Whether it’s a coworker, manager, or HR staff, invite a third party to the meeting that’s seen as respected and neutral by both of you, and who preferrable has experience resolving similar conflicts and is committed to positive outcomes.

3. Figure Out the Main Issue

In many cases, what people think that workplace conflicts are about is quite different than the real issue at stake. Maybe you notice that your coworker is consistently not cleaning up after themselves in the common areas. While you might believe that this is the only issue, it might be the case you harbor some resentment towards that individual because they missed a deadline on a previous project, or don’t appreciate their overall communication style. So, when you discuss the issue, make sure to focus on asking questions and pin down what needs aren’t being met on all sides involved in the conflict. Obtain as much information as possible, and think deeply and objectively about the situation to make sure you’re addressing the core issues and not just superficial ones.

Once you’ve gotten down to the core problems that you and all other parties are facing, you’ll need to collaborate to establish common goals in order to move past the dispute. In this stage, all sides will come to a consensus about how the conflict should be resolved. This step is critical because that when people know they are working towards a mutual goal, they’re more likely to be committed to taking the necessary actions to reach those goals. Find things in common that both sides would like to see happen, and develop a simple action plan to make those happen. These goals can be long term, or even as simple as “we need to stop arguing.” Either way, you need to find a starting point with achievable goals so everyone involved in the process can see and feel concrete progress.

5. Discuss how to Meet Goals

Agreeing on goals, deliverables, and an overall starting point for dispute resolution isn’t the end of the process (far from it, in fact). Next, you’ll need to dig deep and discuss how precisely you’ll meet those goals, as well as be honest about what barriers or challenges that all parties might face along the way. This builds on step two, and involves a lot of listening, learning about the other side, and brainstorming potential solutions until you both feel that all options have been exhausted or laid on the table. In terms of barriers and challenges, focus on sorting out what factors in the dispute you’ll focus on changing, and on what things can’t be changed. For things that are out of your control, mutually brainstorm and figure out ways to work around those specific roadblacks.

6. Agree on a Way Forward

After you’ve effectively hashed out the goals you’ve mutually agreed to achieve, you’ll want to come to consensus on how you both see the conflict being resolved in the end. For starters, identify resolutions that you can both live with. Whether it’s committing to better communication, or better respect for one another’s workspace, agree on a resolution and identify the responsibilities each party has towards making it a reality. Again, focus on remedying the core problem, as often people tend to focus on fixing surface level issues only to have the conflict arise again because the root hasn’t been addressed.

Finally, make sure to drill down specifically the roles - and corresponding responsibilities - each party will play in creating a long term solution to the conflict. Make sure that all parties express aloud to each other what their commitments are, why they think this will work, and what their responsibilities they have in making it happen. After everyone has agreed on what’s a “win win” resolution for everyone involved, verbalize to each other using phrases like “I agree to…” or “My personal commitment is to…” to really seal the deal in terms of making sure everyone stays on track moving forward.

Solving disputes and disagreements is one of the most feared things in the workplace. But by setting aside time to talk, mutually developing an action plan, and committing to roles and responsibilities, you’ll be able to ease over situations and turn conflicts into resolutions.